A Message from the Mayor of Sleaford 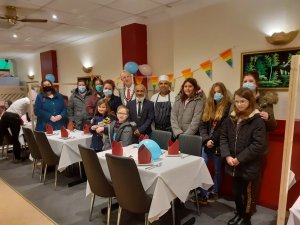 A message from the Mayor of Sleaford, Councillor Robert Oates.

Big thanks to everyone who attended the Mayor's Charity Dinners at the Gurkha-19 restaurant in Sleaford on Monday and Tuesday evening.

The two nights raised £550 for Sleaford's own Rainbow Stars, the charity for children and young adults with autism and additional needs.

Thanks also to the owner and head chef at Gurkha-19, Mr Netra Prasad Kande, for his generosity in hosting the event and to Mr Nadim Aziz for organising. Both are in the picture below with some of the Rainbow Stars children and organisers.

The raffle was won by Councillor Mrs Lucille Hagues and Gavin T.

The Mayor's next fundraising event is a Burns Night celebration on 22 January, for details and to book please visit the Community section of our website on www.sleaford.gov.uk