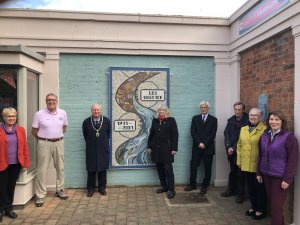 The unveiling of the Les Gostick Memoral Mosaic was unveiled last weekend in a socially distanced ceremony. Present were the Mayor and Mayoress of Sleaford, members of the Sleaford and District Civic Trust, MosArt and the Sleaford Museum and also members of Les Gostick's family.

The beautiful and eye catching Memorial Mosiac is dedicated to Les Gostick, who was a courteous gentleman who campaigned to 'Save Our Slea' when the river was drying up. The installation of a pumping station that kept the water flowing is mainly thanks to him and why we still have a River Slea today.

Les was born in Millfield Terrace in Sleaford and lived for 67 years in Jermyn Street. He joined the GPO when he left Carre's Grammar School and excelled at Morse Code. Les rose to Head Postmaster in Sleaford.

Les joined every historical and archaeological society available that protected and preserved Sleaford's past, writing books and orally recording its history. An annual walk takes place in his name.