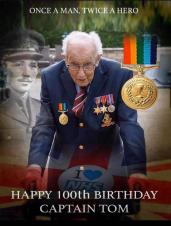 Captain Tom has raised £30 million by walking around his garden and has lifted the nation's spirits and captured the country's hearts!

He was treated to a flyover of a Hurricane and Spitfire from RAF Coningsby to celebrate this special day. 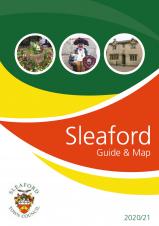 The Sleaford Town Guide for 2020/2021 is now available to view on our website under the Visitors section.

The publishing company who created the Town Guide have informed us that they will commence printing of the Guides at their earliest opportunity, once they are able to open again following the Government's advice.

Sleaford Town Council will be observing a one minute's silence at 11.00am today, Tuesday 28th April 2020, to remember and pay tribute to the NHS staff, carers and key workers who have made sacrifices and passed away in the Coronavirus pandemic

It is recommended that children and young people should be active for 60 minutes a day. This can be challenging with the Covid-19 outbreak, but there are lots of indoor activities, games and recipes which can be found on the Change 4 Life website www.nhs.uk/change4life

Why not give some of the ideas a try!

Smoking and the Coronavirus Pandemic

The World Health Organisation has advised that smokers are likely to be more vunerable to Coronavirus as the act of smoking means that fingers (and possibly contaminated cigarettes) are in contact with lips, which increases the possibility of transmission of the virus from hand to mouth. Smokers may also already have lung disease or reduced lung capacity which would greatly increase risk of serious... Read More »

It is important to try and keep physically and mentally well, but particularly in the current climate.

The NHS have put together free exercise videos and information. These can be incorporated into your daily exercise routine.

If you are self isolating at home during the Coronavirus outbreak and have a possible infection, plesae visit www.gov.uk for useful guidance and information.

Reminder - Use of Public Open Spaces

All public open spaces are only to be used for exercise with members of your own household. Please stay at least two metres apart from anyone else.

Gatherings in open spaces of more than two people are banned and the Police are patrolling to enforce this.

Please visit www.gov.uk for a useful guide to Coronavirus by the Government.

For your personal safety and that of others, you must adhere to the following: -

Thank you for your co-operation and supporting your local market.