The Handleys were a prominent family in Sleaford during the late 18th century and early 19th century.

The family came to hold position as lawyers, bankers, politicians and clerics in the town and attained great wealth and holdings in the area.

In the latter part of the 1800s, some of the family emigrated to New Zealand (and later Australia) as well as returning to Newark. 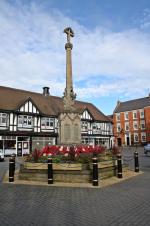 The War Memorial in front of the Parish Church of St Denys' in Sleaford Market Place has six steps to a hexagonal stone base, with niches and cusped heads containing the names of the dead. It also supports three statues of warrior kings and a slender shaft terminating in a rood.

The Memorial is in proud and grateful memory of the men of Sleaford, Quarrington and Holdingham who laid down their lives in the Great War.